Our run  of lovely weather is set to change, here in the South East. Today began mistily and it was chilly. I left the greenhouses shut until lunchtime. The days are exacting for the best handling of the greenhouses ..... sometimes too cold and sometimes too hot. Luckily both new ones have automatic vents. They are very helpful. Tomorrow we might get some rain. Just the other day we had red Saharan dust blowing across the country, most noticeable on the cars.

I have been sorting through my seeds ... packets and packets of them. They are usually in drawers according to the month but I am finding I need subdivisions ... half-opened packets, give-aways, ones to scatter. I intend to do the scattering on any bits of bare ground quite soon, though where that is I can`t think.

I have tried again with the yellow rattle. Steve warned me to sow the seeds with grass as they are parasitic but I did not heed his advice. Now they are sown with grass seed. I hope they are still in the same soil somewhere.

I have sown corncockle into our wild bank. I mixed the home-saved seed with soil, mixed well, dug clods from the bank and deposited a handful in each.

At the garden the first scarecrow is outside. 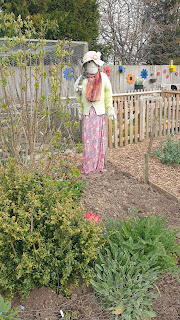 Buddy the new puppy, was completely confused yesterday when he spotted her for the first time. He barked and barked and wouldn`t go past the bed. Today he seemed a little more used to her.

We don`t have many bulbs at the garden but these are particularly lovely at the moment .... in the old water trough. 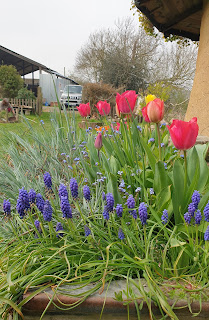 And these double dafs were rescued.

I have started on the last flower bed. This will be the wildflower bed come summer. A bit of rain will help to break the soil up ready for planting later on.

I put the finishing touches to the fairy palace by adding some butterflies. The pastel fairies are new residents. 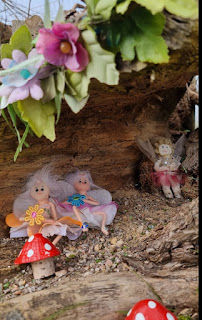 The gnome home is waiting for its residents alongside.

Then it was off home with a big bunch of brocolli which has been made into our soup supper.... it was delicious. 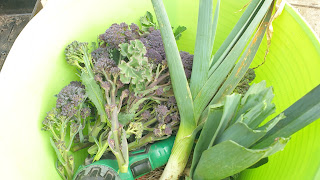