I can`t honestly say that I have done any extra craft over the lock-down period but I have had a big project which is now completed.

My first idea was to knit some squares for WI so I have made them some multi-coloured ones.

Then I decided to make a lap blanket. 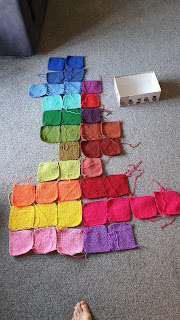 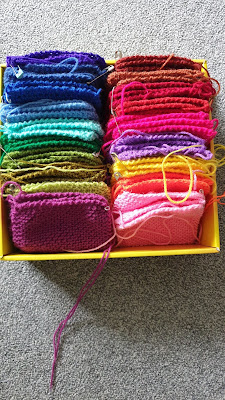 When I had enough, I began to crochet round each one in black but when I sewed them together they looked a bit "bubbly."
In the end I sewed the squares together and did a chainstitch on top. I lined it with a fleece blanket and gave it a shell edging.
It still has a slightly bubbled look but what I really like is its weight and that it moulds over your lap. 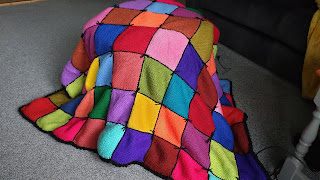 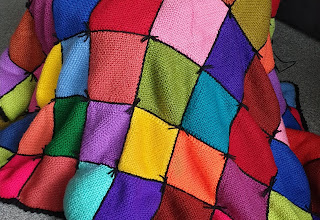 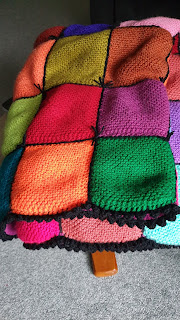 Another project has been to make laundry bags for my sister in law Julia`s nursing team.
When their shift is finished, they place the scrubs/uniform into the laundry bags and wash. It is less handling. 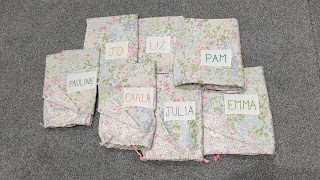 As some of you know I usually have an honesty shop at the garden in the Wool Barn. This year everything is different.
I have a lot of craft!!!
Amongst it all, I had ten small teddies.
I decided to sell them on our village facebook page to raise money for NHS Charities Together. 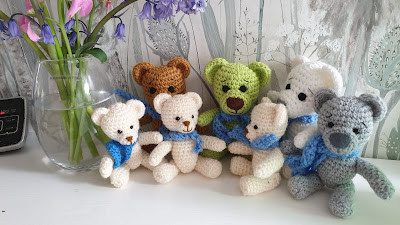 They were all accounted for by the end of the first evening.
People have collected them, sealed in dated zip bags, from our doorstep, with the money posted through the letterbox.
They went past my target of £50 up to £75.
I was very pleased.
I was particularly happy to hear where the little bears would be going, many to grandchildren from grandparents unable to meet up.

Now its facemasks.
More about that at a later date.