We received some beautiful Christmas cards this year.
I usually make a lot of parcel tags, put them away and keep them ready for the following Christmas celebrations. 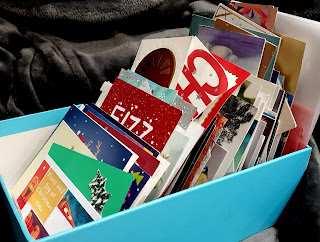 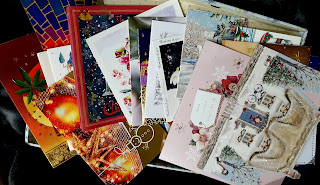 This year I did a bit of research, mainly on Pinterest, for different crafty ways of recycling.
At the January village coffee morning, run by Tim and Anne, we had planned to demonstrate how to do this.
It all went very well with a lot of interest shown and quite a few people learning how to make tiny boxes  and baubles. 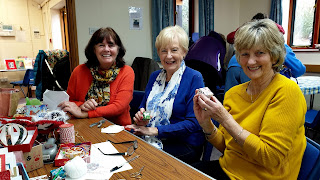 Paula and I showed Pam and her friend how to make little boxes.

Here are some of the other ideas. 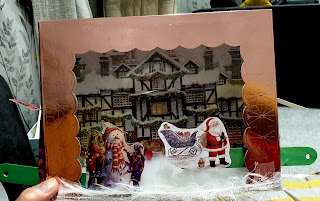 On the summer holiday in Lincolnshire, I made a mini-theatre with my two nephews. Its theme was knights and castles. The characters, set against a backdrop of a castle, were stuck to lolly sticks and quite a few stories were made up.
There are slits in the side of the box for
the characters to "come on stage."
This picture shows a gift box cut to size with a snowy scene Christmas card stuck to the back. I found the characters on various other cards. It just remains for children to make up their own stories. 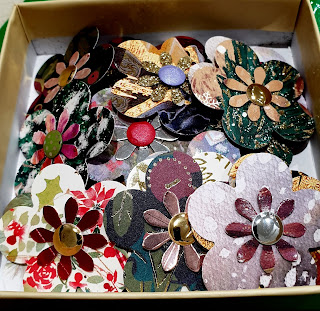 These flowers are made using a couple of flower punches of different sizes. They are stuck together with glue dots.
They can be used as gift tags or as card toppers.
Someone suggested they could be hung on the tree just as they are. 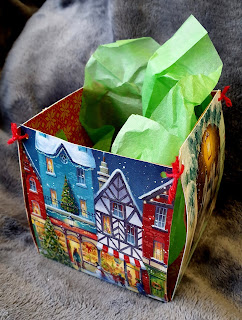 This is a simple box made from 5 squares, cut from cards.
I stuck it together in the shape of a cross, punched holes in the top eight corners and tied with coloured wool.
This could be developed further using crimped scissors and ribbon. 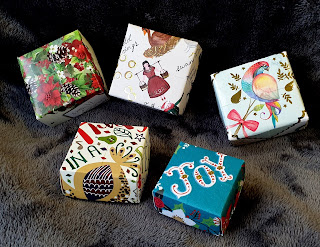 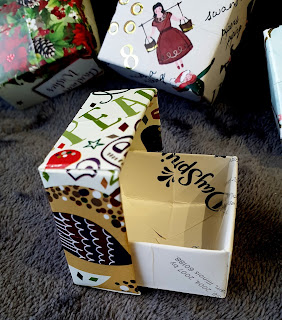 They are made using one card.
The card should be cut into squares, the top being the front of the card and the base being the back of the card. The base should be half a centimetre smaller than the top.
A top tip is to choose cards made with thinner cardstock as the folding is tricky if its too thick.
I will add the pattern at a later date.
The boxes also proved popular at the school Christmas fair and the craft fair. Paula made dozens of them. 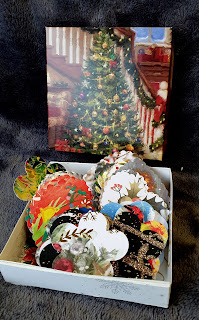 This too, is a very simple folded box, much flatter and filled with punched shapes. 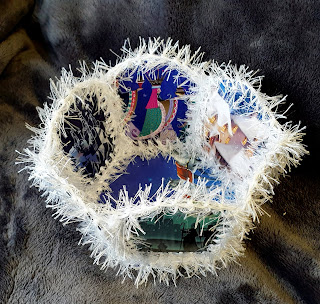 This is a far more complicated craft, and takes a lot longer. You need 14 card fronts. You can colour code them if you have enough cards to choose from.
The bowl is based round a hexagon. Each outside shape is stuck back to back and punched all round.
You can crochet or blanket stitch each one, then it is sewn together to form the bowl. I like to fill them with shredded celophane and tip in a box of chocolates. It makes a nice gift. 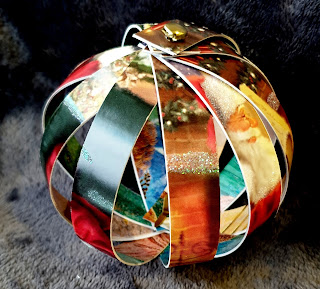 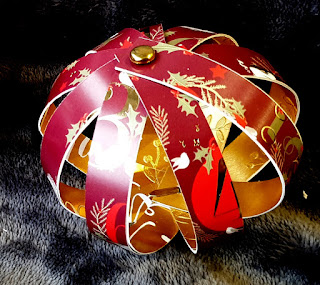 These baubles are made with a card cut into one and a half c.m strips. Each strip is punched at each end. Two split pins are used to hold the top and bottom together.
Both of these are made with doubled card of contrasting colours.

Here is a closer look at the flowers. 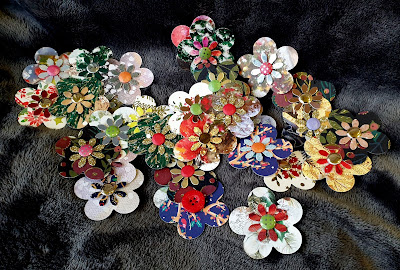 Parents at my nephews` school have been asked to save their old Christmas cards with a view to recycling.
At next years fair they are hoping to have a table of recycled card craft to raise funds.
I very much hope to be part of that.